Why a "franchise" instead of a license program?

Why don't more franchise lawyers recommend a licensing program instead of those pricey franchise programs? Why bother with all those franchise regulations, when we can avoid the hassle and cost with a simple license? Are the lawyers just in it to make money?

These questions are on the mind of every potential franchisor. I have written about licensing before - Let's Just Sell Licenses! But before you conclude that there is a "lawyer conspiracy," let me say that it is FOR YOUR OWN PROTECTION.

The issue confronting entrepreneurs who want to just "license" their concept is that it is very difficult under existing law to craft a program that avoids the legal definition of a "franchise" or "business opportunity." It can be done BUT any misstep can subject the start-up "licensor" to federal and state violations, forced rescission of deals, penalties, attorney fees and even criminal prosecution.

While space does not allow a full discussion of the benefits of franchise compliance, let me offer one example: Ohio (where I practice) has a business opportunity law. That law can be completely avoided via an exemption  if the seller "complies in all materially respects" with the FTC Rules - under the FTC franchise rule this means providing a Franchise Disclosure Document to potential buyers. This is a pretty nice insurance policy. A "licensing" program that meets the definition of Ohio's business opp law that has NOT provided a compliant disclosure document, will have NO insurance.

And, as we move outside of Ohio, more examples exist. If you want to review some of these laws, visit the Resources tab on my website.

Amid all the sales, the onset of summer, cookouts and parades ...let's not forget that Memorial Day is for remembering and honoring those fallen military members who have sacrificed their lives for the rest of us. 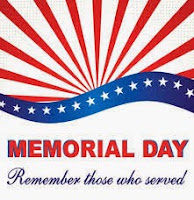 While we can only remember and honor those who are gone, our surviving members deserve your acknowledgment of gratitude and respect as well.

VetFran - a strategic initiative with the International Franchise Association to "Provide Access and Opportunities in Franchising to Our Nation’s Veterans and Their Spouses."

VetFran Directory - over 600 franchise companies participate in the program. Their company profiles, as well as the financial incentives they offer to veterans, can be viewed in the VetFran Directory.

Enjoy your holiday but take a moment to honor the brave!
Posted by Jim Meaney at 10:17 AM No comments:

I left you alone for a few weeks - "pesky" clients, franchise registrations, mediations and other work matters have dominated my time (thanks to the franchise gods) ... and nothing was striking my fancy to rant ... uh, blog about until I came across two articles.

The articles: Why Being a Franchise Owner Sucks (The Business CheatSheet) and Does the Franchise Industry Need Reform? (Blue MauMau). So you see I am not responsible for the bawdy title of this blog. Come'on its in quotes!


Both articles draw from surveys and analyses done by FranchiseGrade.com (never heard of them until I saw the articles but I see from their site that they have an impressive advisory board that includes some of my colleagues from the American Bar Association's Forum on Franchising.)

As you may guess from the titles of the articles, some franchise owners are not happy. Here are few excerpts:
So who is at fault? Being "The Franchise Contrarian" my answer may surprise you (or not).

I place fault on the franchise buyers. It is a marketplace people! Franchises are being sold in all manner of businesses, in all shapes and sizes, sometimes by people who just have a concept, not a fully-functioning business! There is no "permit" or "license" to become a franchise-seller, no governmental agency "approving" the success or quality of these businesses, no industry program vouching for the legitimacy or financial stability of franchise concepts.

Now we do have disclosure requirements and some states have registration schemes. But my observation is that most buyers DO NOT conduct enough due diligence, do not hire experienced franchise counsel, do not grasp what it may take to turn a profit, and think that all franchisors have the pot of gold at the end of the rainbow.

So yes, in this marketplace of franchised businesses, "Buyer Beware" - use the tools that the regulations provide and stop buying under-performing franchises and untested concepts.