Just finished reading Kaufmann, Gildin & Robbins LLP's (led by David Kaufmann) article: A Franchisor is Not the Employer of Its Franchisees or Their Employees, published in the American Bar Association Forum on Franchising's Franchise Law Journal (Spring 2015).

Kudos to David and his colleagues (Breton Permesly, Felicia Soler, and Dale Cohen) - not only have they taken on this controversial issue (triggered by the NLRB General Counsel), but have produced a virtual treatise on the historical evolution of franchising and its legal underpinnings. Long story short - the NLRB's General Counsel's Complaints lack substance, completely ignore the role of the Federal Trade Commission in franchising and likely will not survive "judicial scrutiny." 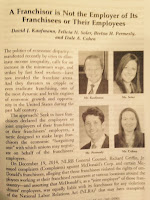 While the article is at times a bit strident, the grounding of the requirements for "franchisor control" in the Lanham Act (the U.S. federal law for trademarks) is superb and indisputable.

This is the keystone to the defense against the "joint employer" position. Franchisors have no choice but to require uniformity to protect their most precious asset - their trademark. If franchisors (or any trademark owner) fail to control the quality of the goods and services delivered under their mark, they risk losing the mark.

David and crew offer a number of other reasons why the NLRB position is indefensible: the FTC's 35-year jurisdiction (which the NLRB General Counsel did not seem to review or understand), the definitions of a "franchise" under numerous state laws and the overwhelming legal holdings of most courts that a franchisor is not the employer of its franchisees or their employees.

The control dichotomy franchisors face must be resolved in favor of franchising and franchisors.

While I challenged the hyperbole used by the International Franchise Association when addressing this issue (see this blog post - NLRB Ruling Impacts Franchising - Existential Threat?), the Kaufmann, Gildin & Robbins LLP-article articulates all the reasons why I declared: franchisors need not panic. A legal day of reckoning will see franchising prevail. And most of the persuasion can be found in the Kaufmann, Gildin & Robbins LLP-article.